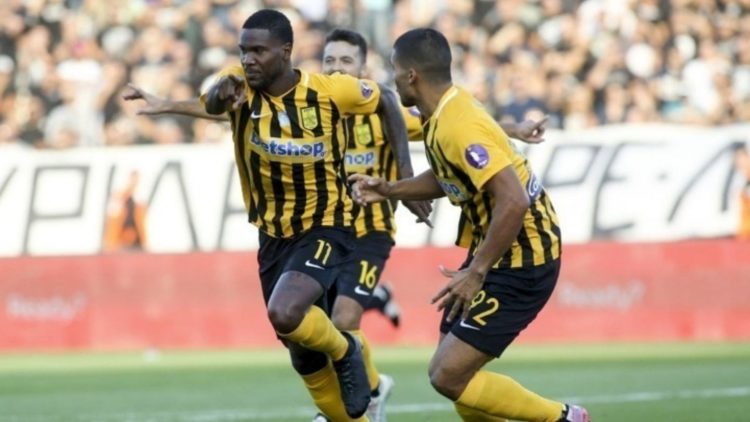 The quarter-finals are scheduled for the 78th edition of the Greek Cup. The footballers from Aris Saloniki receive the capital footballers from Atromitos Athens. 84 teams started at the start. The Super League clubs have only been represented for two rounds.

The starters from the upper house, who ranked among the top five teams last season, only intervened in the action in the last round. This included the guests who prevail against the league rival Volos. However, this was only narrowly because after a 3-0 in the first leg there was still a 0-2 defeat.

The hosts from Thessaloniki confidently made their debut in the cup. Two victories against Xanthi brought a fully deserved entry into the next round. Aris also has a strong season in the Super League. Due to failures, however, the benefits declined recently.

The Athenians were also not very constant on the last match days, which is why both teams are now hoping for a success in the cup. The Aris Saloniki vs. Atromitos Athens tip includes under 2.5 goals. The guests were particularly weak on the offensive and, as mentioned, the home side were less accurate due to personnel concerns.

In addition, the selected goal number limit is traditionally not broken in this pairing – at least if Aris has the home right. The last eight games of the group from Thessaloniki in front of their own audience against the Athenians ended with a maximum of two goals. The Aris Saloniki vs Atromitos Athens prediction is played with six units.

Aris won the trophy for the only time almost 50 years ago. A meager result against the background that the club has already reached the final of the competition nine times. The three-time master of the country has caused quite a sensation in the past few weeks.

For example, the reigning title holder PAOK suffered the first defeat of the season 4-2 in the city derby. The opponent had not lost a single match in their entire course in the last season, which makes the three again more respectable.

The upward trend is primarily associated with the name Michael Oenning. Since the 54-year-old German took over the coaching position, Aris has presented itself more competitively. However, the positive trend has recently come to a standstill. The reason was the loss of enormously important players. One example is the Nigerian Brown Ideye.

The striker came to Aris free of charge. Ideye was previously without a club, but in the course of his career well-known former employers such as West Bromwich Albion or Olympiakos Piraeus can be discovered. The 31-year-old attacker has been consistently strong at Saloniki, but has been absent due to an injury since the defeat at Piraeus just three weeks ago, when Ideye had to be replaced shortly before the break tea.

In addition to Ideye, Gama is undoubtedly the most important offensive player. Gama provided evidence of this assessment last Sunday when the 32-year-old started the 2-0 victory against Panionios in the Super League with a goal.

While the opponent, as described, was able to win the cup at least once, Atromitos has never been granted this. 2011 and 2012 at least made it into the finals.

But first you had to give in to AEK Athens and a year later the record cup winner Olympiakos Piraeus prevailed after extra time.

After a fourth place last year, things are going worse this season. Atromitos is currently in eighth place and has only been bankrupt for three rounds. The current placement would not be sufficient to take part in the newly created championship round after the end of the regular season.

Top striker at Athens is Georgios Manousos with nine goals in the Super League. In his third season at Atromitos, the 32-year-old had blossomed and clearly exceeded his previous performance. For several weeks, the striker has also been in a deep form. He only scored in two of the last ten competitive matches.

It is also a special match for Coach Savvas Pantelidis. The 54-year-old was still the responsible trainer for the team of the upcoming opponent until the end of August. He started his current job around two months ago. Pantelidis initially brought about a significant upswing, but this has now turned into the opposite.

For five days, the offensive has ceased operations and has not scored a single goal. At Aris Saloniki against Atromitos Athens the odds for a clean sheet of the hosts on top are of interest.

The last direct encounter was in the Super League at the beginning of December last year. The match in Athens ended with a 2-2. It was also the debut of Coach Savvas Pantelidis at Atromitos. Thanks to the draw, the capitals have been unbeaten in this pairing for five competitive games (3-2-0).

Aris won at least one friendly game last summer. For four games in front of their own backdrop, however, there has been no competitive win against the Athenians (0-2-2). For the new duel between Aris Saloniki and Atromitos Athens, the odds indicate an end to this series.

Atromitos looks less strong this season than last year. One reason is without a doubt the departure of Efthymios Koluaris. The striker was the top scorer in the Greek House of Lords last season, with Koluaris playing on loan from PAOK in Athens. The master then transferred the talented attacker to Toulouse in Ligue 1.

The remaining offensive is currently very weak: read on five competitive games without a goal. Saloniki also had problems recently. Bankruptcies and victories have alternated in the championship for four rounds.

Admittedly, the Oenning eleven competed with the leaders Olympiakos, which is why this slump can be put into perspective. But with Brown Ideye the top striker is still missing. Given these points, the Aris Saloniki vs. Atromitos Athens Tip a maximum of two goals in the course of the game.

This is also supported by the fact that the guests will play very defensively in the first leg of the quarter-finals in Thessaloniki because they can already live well with a draw. On the other hand, the home side will attack only in a very controlled manner in order to avoid a particularly painful away goal from the opponent in this case.