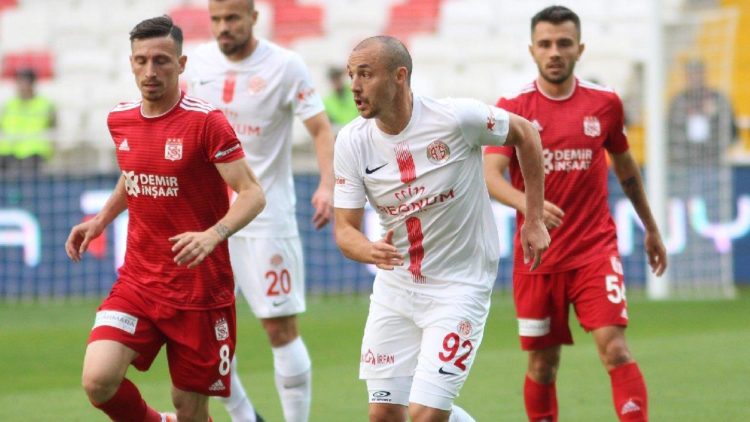 The hype surrounding Sivasspor is over. The “Yigidos” are in a form crisis and are worried about the league lead in the Süper Lig. If the Red-Whites lose the top game against Trabzonspor, the Black Sea Club will even overtake the “Yigidos” with one game less on their account.

The double burden from the “Türkiye Kupasi” comes for Sivasspor at a very bad time. In the first leg, Riza Calimbay had rotated in a few positions. Despite being outnumbered, Sivasspor fought a well-deserved draw in Antalya. In the second leg there is some evidence that the “Yigidos” will win at home.

A decisive argument for a bet on the home team is certainly the home advantage. Sivasspor is namely the strongest home team in the Süper Lig. In the bookmaker odds comparison, Betsson currently offers the best odds for Tip 1 for Sivasspor against Antalya. In the first leg, Antalyaspor remained largely harmless despite being outnumbered. Only two shots were fired at Sivas’ goal.

Last weekend there was also a disappointing draw for the scorpions from Antalya at the bottom of the Süper Lig table. Given the weak performances in the last competitive matches, we would rather advise against a prediction for the guests at Sivasspor against Antalyaspor.

No Anatolian miracle. With the recent form crisis, the “Yigidos” are back on the ground of the facts. The title race in the Süper Lig is completely open again. The top game against Trabzonspor is on the weekend for the red-whites from Sivas. If the “Yigidos” lose to the Black Sea club, a new league leader will be at the top for the first time since the eleventh game day.

Before the trip to the Black Sea starts, Sivasspor has to master the cup second leg against Antalyaspor. In the first leg there was still a goalless draw despite being outnumbered. Trainer Riza Calimbay rotated in some positions to at least avoid the physical strain.

The performance in Antalya was certainly in need of improvement, but it was good given the circumstances. Sivasspor can buy the ticket for the “Türkiye Kupasi” semi-final against a home backdrop. In the Süper Lig the “Yigidos” are the strongest team in the league with a home record of 8-3-0.

Yeni Malatyaspor felt this in the last round of the cup. Sivasspor swept 4-0 over the top ten of the Süper Lig. Should Riza Calimbay rethink his starting decisions in the second leg and largely play in the best line-up, a home win over Antalyaspor will hardly be at risk.

Judging by the results so far in the second half of the year, the trend reversal among the scorpions from Antalya has not yet been initiated. The team of Tamer Tuna is still in danger of relegation. Last matchday there was the next setback for Antalyaspor with the draw at the bottom of the table Kayserispor.

The next match in the Süper Lig is pioneering so that the red-whites do not slip to a relegation zone. The scorpions meet Kasimpasa at the end of the 22nd game day. Before the basement duel is due, Antalyaspor’s cup return against Sivasspor will rise on Thursday evening. In the first leg there was only one draw for Antalya despite being outnumbered.

The semi-final ticket is to be bought in the icy Sivas of all places. In the last five away games there was only one win for the scorpions from Antalya. The team from Tamer Tuna conceded nine goals. In order to survive the strong Sivas at home, the individual defenses must be eliminated.

Five players will miss the cup game in Sivas due to injury. Tamer Tuna is unlikely to make any major changes to his youngest starting XI.

This season Sivasspor and Antalyaspor meet for the third time. The first match in the first half of the Süper Lig ended with a 2-1 home win for Sivasspor. The cup first leg a week ago ended in a goalless draw. Cross-competition, Sivasspor leads with 14-7-9 the direct comparison against Antalyaspor.

Sivasspor wants to keep the chance to win a cup. Even if the top game against Trabzonspor is on the weekend, Riza Calimbay will tackle the home game against Antalyaspor with the best players. After the goalless draw in the first leg, Sivasspor can fix the semi-finals with a home win on Thursday evening.

Given the strong home record of Sivasspor, on Thursday evening we find a prediction for the “Yigidos” highly recommended. The guests from Antalya remained largely harmless in the first leg despite being outnumbered. In the second leg we therefore assume a clear matter in favor of the home side.

♦️ The first leg in Antalya ended in a goalless draw.
♦️ Antalyaspor has been victorious in four of their last five away games.
♦️ Sivasspor is the strongest team in the Süper Lig.

This would also give Sivasspor a lot of confidence. A home win over Antalyaspor would be a relief. Most recently, the “Yigidos” remained without a win five times in a row. In Sivasspor vs. Antalyaspor we would place our tip on good betting odds on a handicap win by Sivas with at least two goals difference.