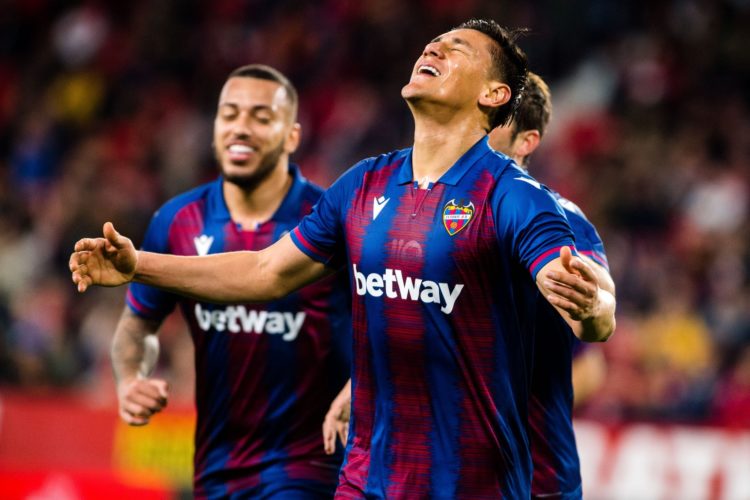 A midfield duel takes place in La Liga – already on Friday evening! In the Estadio el Sadar Osasuna receives the table re-maker from Levante, the signs before the game are quite interesting. Both teams have forward qualities, problems on the defensive and with constancy. Before the game Osasuna vs. Levante odds are very high on a draw, but it’s definitely worth a look.

But back to the table situation. Osasuna is in 13th place with 25 points, the guests from Levante have one more point and are in twelfth place. This situation alone already indicates that nuances could decide in this game.

During the week, both teams played in the Copa del Rey. Osasuna won 3-2 at Recreativo, while Levante lost 1-3 in Sevilla. But that is not necessarily crucial for the upcoming game.

Osasuna with coach Jagoba Arrasate is at the moment where you could expect this team before the season. The midfield of the table fits Osasuna and the qualities of the team, the distance to the first relegation place is already nine points.

For Osasuna, the last few games were a kind of ascent and descent. The two away wins in the Copa del Rey were positive. In the league, on the other hand, there were two draws against Valladolid and Celta Vigo, and also a bankruptcy against Real Sociedad.

But even if the two teams are close together, before the game Osasuna vs. Levante’s odds indicate a favorite role for the hosts. However, since the 4-2 win against Alaves in early November, Osasuna has been waiting for a home win in La Liga. Since then there have been two draws and two losses.

A problem in recent weeks is that Osasuna is barely playing to zero. One or the other defensive player dropped out recently, plus a few individual mistakes. In addition, the individual class in defense is not particularly high anyway, even if the absolute top stars are missing in almost all parts of the team.

One player who comes close to this status is Chimy Avila. He is the central player on the offensive, scoring nine goals and preparing three more goals. The guests from Levante have to take special care of him.

Because Avila is always good for a goal and Levante is also able to pose problems for Osasuna’s defensive, which has not always been stable lately, our tip is that both teams score in this game.

It will be important for Osasuna to compensate for the failures. Left-back Toni Lato is missing and captain Oier in the defensive midfield has to pass. The same applies to the somewhat more offensive Fran Merida. In 4-4-2, the full-backs will want to push again enormously to stage the offensive and to pose problems for Levante.

Many elements that apply to Osasuna can also be mentioned in connection with the guests of Levante. After all, the team of coach Paco Lopez could win a league game with the 3-1 against Celta Vigo in the last few weeks, however for Levante in the Copa del Rey it was over in Sevilla as mentioned at the beginning.

Levante also has offensively interesting players like Roger Marti, who has already been successful nine times. And Levante also has defensive problems, especially with individual mistakes. In addition, there is no consistency on the course. That makes Osasuna vs. before the game Levante made a prediction on the winner of the game so difficult; a lot can happen, the form of the day will decide.

It is surprising that both teams can be relatively relaxed before this game when it comes to the relegation gap. All the more concentrated and with less pressure, both can go into this duel. But it is also clear that an even greater distance from the critical area of ​​the table is desirable.

As already mentioned, Levante is always good for a hit. In addition to Roger Marti, the strong Borja Mayoral is a weapon, but captain José Morales can also create a goal threat at any time, even if he is a little too inefficient this season. The fast Hernani, who knows a lot to do with space, is supposed to provide accents in the counter game.

In addition, the midfield must try to win sovereignty. Without Bardhi, this should be difficult, he is an important structural element. So it will depend more on José Campaña, who has to strike a balance and pull the strings.

In addition to Bardi, Rober Pier and Jorge Miramón are missing on the defensive, but their failures should be somewhat compensated. Hernani will probably be on the pitch with Morales and Marti on the offensive, whether Paco Lopez decides in midfield for a more offensive or controlling variant is still open.

So far, both teams have faced each other in 21 duels. It is striking that there was hardly a draw between the two teams – only twice did no team leave the course as the winner. The rest of the balance is balanced, Osasuna won ten games, Levante won nine games. Levante has been unbeaten in the last three games – and the first leg ended 1-1.

As mentioned, it is difficult to make a prediction before this midfield duel. Osasuna has qualities and problems, the same applies to Levante. Therefore, Osasuna vs. Levante’s odds are anything but clear. But to the facts: Osasuna has been waiting for a home win for a long time, but Levante does not have the best record abroad.

In addition, both lack a bit of the surprise factor in the attack. Both teams have a top scorer, but little comes after that. Nevertheless, apart from their target players, both are not harmless.

♦️ Osasuna: Only team in the lower half of the table with a positive goal difference!
♦️ Levante hasn’t played a draw away this season!
♦️ Osasuna has been waiting for a home win since November 3rd!

All in all, many factors and signs are balanced, but what is particularly striking is the defense of both teams, which has not been solid in the past few weeks. Relieved of the huge pressure, this should mean that there will be some goal area scenes to be seen.

Therefore before the game Osasuna vs Levante our tip that both teams to score.