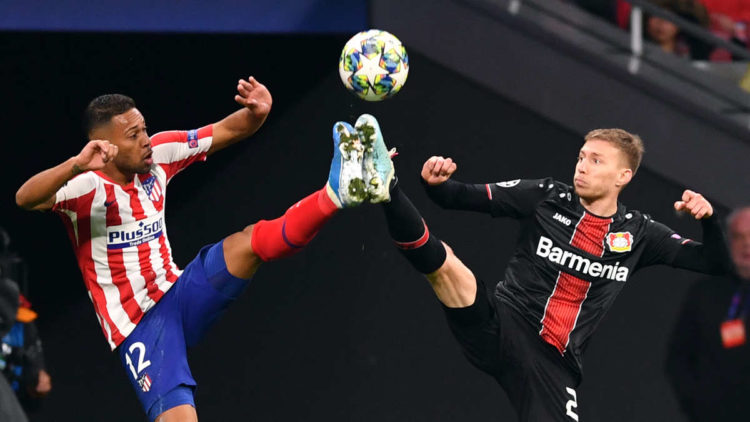 Bayer Leverkusen’s chances of securing their place in the Champions League in the last sixteen have fallen to a minimum for at least two weeks. The late 0-1 defeat at Atletico Madrid meant the Werkself needed a mid-sized miracle to overtake the Rojiblancos or Juventus in the Group D table.

Realistically, the goal on the remaining three matchdays must be to at least make Lokomotiv Moscow the third rank and thus to winter in the Europa League. It would be enormously helpful in an unexpected point win in the home game against the Spanish top club.

Incidentally, the subjective assessment that we make with the term “unexpected” does not necessarily match the distribution of bookmakers’ odds between Leverkusen and Atletico Madrid, which do credit the Bundesliga quite a bit.
This may be due to the fact that the team of Peter Bosz also held in the Spanish capital for long stretches very well and finally conceded just before the end the bitter goal to 0: 1 defeat. In addition, the Simeone-Eleven is in no outstanding condition, which is evident by only one victory from the recent six La Liga games.

But also because Bayer 04 last several times remained under their own possibilities and in league life left many points, we would foresee at the match Leverkusen against Atletico Madrid by a forecast on the outcome of the game.

Instead, we are focusing our attention on a successful second half of the Spanish guests, who could sometimes benefit from the fact that the Rhinelander have to win in order to preserve the theoretical chances of the last sixteen. Regardless, there is hardly any other team in Europe that is more fearful and frightening in terms of cleverness and efficiency than the Madrilenians, especially when the enemy threatens to abate.

If we take a good month into the past, then the world was still alright at Bayer Leverkusen. The “Werkself” had just won 3-0 at FC Augsburg on Matchday 6 and thus made the connection to the then front runner from Munich.

At that time, the Dutch coach also had a highly talented squad, but did not manage that the individual players and the entire collective constantly retrieves the existing potential every three days. Also for Bayer Leverkusen 2019/2020, the term consistency seems to remain a foreign word for the time being.

If we exclude the lackluster 1-0 victory one week ago in the second round of the DFB Cup against SC Paderborn, four of the youngest six matches were lost. Only home against Werder Bremen and RB Leipzig struggled Kevin Volland and Co. each to a draw.

In the Champions League, however, Bayer conceded two expected defeats against Juventus and Atletico Madrid, in which the former finalist of the premier class was good for long stretches well, but ultimately still paid lesson and above all there was no countable. The situation before the beginning of Wednesday’s second half is therefore catastrophic.

With zero points, the Werkself are in last place and are seven points behind Juve and Atletico. Even Lokomotiv Moscow, which they wanted to leave behind in terms of a “descent” in the Europa League, has thanks to the success in direct duel three points more in the account and may therefore see himself in the pole position for third position.

This constellation has the consequence that the Bundesliga club must win on Wednesday, if he still calculates mathematical chances to progress. Apart from that, the Bosz-Elf, who slipped to rank ten in the highest German league, wants to make amends for the 1-2 defeat of Gladbach at home and at the same time recharge their batteries.

Due to the potentially riskier nature of the second-half tie-up, between Leverkusen and Atletico Madrid we have the guessing odds that the visitors score more goals after the break than in the first 45 minutes, which is extremely lucrative. Lars Bender and Daley Sinkgraven are definitely out. Changes in the starting eleven would be quite conceivable after the weak first half in the Rhine derby against Borussia Mönchengladbach.

Atletico Madrid is currently playing for the tenth time in the UEFA Champions League. In seven of the nine previous cases, the Spanish runner-up from the 2018/2019 season reached the knockout round. Also in the current season, much indicates that the two-time finalist quite easily creates the leap into the second round.

After three matchdays, the team of coach Diego Simeone has nevertheless stately seven points in the account. A 2-2 win against Juventus, which felt like a win due to a 2-0 deficit, was followed by two close successes at Lokomotiv Moscow (2-0) and at home to Bayer Leverkusen (1-0).

Conspicuous: All five Atletico goals in the 2019/20 group stage have so far been in the second half. However, those who now believe in a random trend, we have to disappoint, because even in the Spanish La Liga, the “Rojiblancos” present after the break significantly more effective than in the first 45 minutes. Consequently, we also put for the duel Leverkusen vs Atletico Madrid the prediction that the Spaniards will score more often in the second half than in the first half.

Although they are currently out of action in La Liga at home and the Simeone team have won only one of the last six matches at the national level, they are in fourth place, just one point behind Barcelona (1st) and Real Madrid ( 2.) continue the connection upwards.

Nevertheless, the harmless offensive, which in every third La Liga game remains completely without scoring (in four out of twelve cases) drives the Argentine chief coach at the moment the beads of sweat on the forehead. Defensively, on the other hand, the Madrilenians have been beyond doubt for many years anyway. Nine goals conceded in 15 competitive games are an outstanding value, which may additionally stimulate Leverkusen vs Atletico Madrid a prediction on another very scoreless game to dare.

The fact that the Simeone team leaves the pitch after 90 minutes as a loser, we also consider relatively unlikely, because of the mentioned 15 competitive games went so far only one lost. In addition, Atletico has lost only three out of the last 25 European Cup matches, as well as only three of their most recent 12 appearances on the international stage.

In the BayArena, the “Rojiblancos” will once again focus on working against the ball and switching quickly in certain situations. The starting position as well as the fact that the Simeone-Elf are among the fittest teams on the continent confirms our assessment that the guests want to make another decision in the second half.

With Jose Gimenez, Stefan Savic and Sime Vrsaljko fall out three potential regular players from the back four. Even century talent Joao Felix must fit injured. However, since the contender for the Champions League triumph has a broad and high-quality squad, the losses can be well compensated. On a performance slump of the favorites we need from German view on Wednesday so not to hope.

Next Wednesday, the two teams face each other for the eighth time in a European competitive match. So far, Atletico leads the direct comparison with three wins, three draws and only a defeat clearly.

The only defeat conceded the Spaniards in the Champions League first knockout round first leg 2014/2015 0-1 in the BayArena. The first leg two weeks ago ended with the same result, but this time in favor of the “Rojiblancos”, who marked the lucky winner in the 78th minute by Alvaro Morata.

Leverkusen’s win against Spanish clubs is also not very good. The mentioned 1: 0 from the year 2015 is namely the only complete success of the Rhinelander from the youngest eight direct duels against representatives from La Liga (three draws, four bankruptcies). After all, only one in five home games was lost. The Madrilenians feel in the Federal Republic but also not very well. Four of the last five return trips from Germany had to compete without points the captains.

In Group D, the second half of the season starts with the matches between Juventus and Lokomotiv Moscow and Leverkusen against Atletico Madrid on Wednesday evening. According to the betting odds, the bookmakers are having a hard time naming a favorite between the Bundesliga club and the top Spanish club. The odds are close together, so a relatively balanced match is expected at eye level.

Two weeks ago, the “Rojiblancos” narrowly prevailed in the first leg 1-0, although the Werkself put up a good performance and thus proved that you can definitely keep up with the best clubs in Europe on good days. Nevertheless, the Bosz-Elf is after three defeats on the first three matchdays with his back to the wall. If the Rhinelanders want to preserve the theoretical chances for the round of 16, a win on Wednesday is compulsory.

But the belief in it is missing, because the “Werkself”, who slipped to rank ten in the Bundesliga, won only one of the last seven competitive games and has come out of tact. Accordingly, it would be important for Havertz and Co. to regain self-confidence and return to the road to success. On the other hand, the Madrilenians have stuck with a win from the recent six La Liga games and a currently extremely harmless offensive, the “shit on the shoe”.

Because we traditionally expect the hosts to be brave and forward, while the Simeone team will put their focus on the defensive, as usual, we expect a fairly low-key first half.

The Spaniards have scored all five goals in the current group stage after the break, so we decide between Leverkusen and Atletico Madrid for the tip that the guests score more goals again after the break than in the first round.