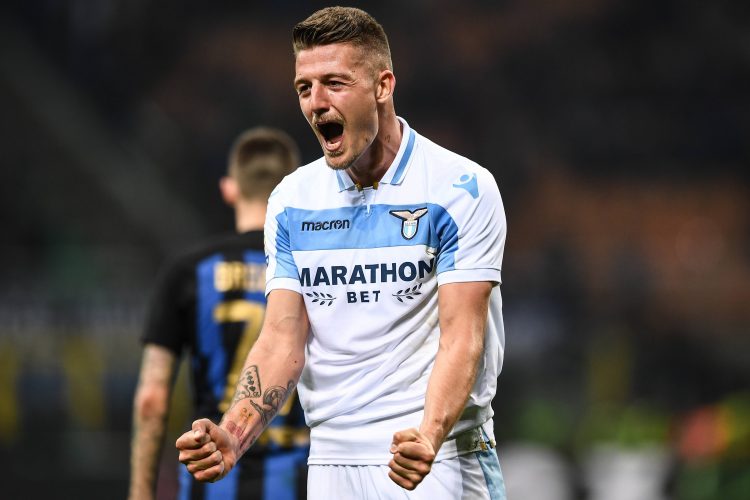 For Lazio Roma is on Wednesday evening with a catch-up game of the 25th Game Day a very important match on the program. After only one point from the last three league games, the Biancoceleste have slipped to eighth place. With a win at home against Udinese Calcio Lazio could shorten the gap to sixth place to a point. The chances of a threesome are not bad, because the guests from Friuli have been without league goals for twelve league games.
Udinese Calcio is fighting against relegation again this season. After 31 games, the Bianconeri are in 16th place, only three points ahead of the first relegation rank. With a success in the catch-up game, the “Little Zebras” could advance to rank 13. Already on Saturday Udinese was a guest in the Roman Stadio Olimpico. With the 0: 1 at AS Roma the Friulaner had to accept the first defeat under the new coach Igor Tudor. Is there the next defeat for Udinese in Roma within four days?

If you believe in the duel Lazio vs Udinese the odds of bookmakers, the answer to this question is “Yes!”. The home side will go to the betting markets as clear favorites in the race. As the odds of a home win are so low, the betting base at the Serie A pick-up match Lazio vs Udinese do not tip on “win Lazio Roma”, but opt ​​for a “over 2.5 goals” bet.

Lazio had to play at AC Milan on Saturday. The guests got the better start, but missed some good opportunities. Only after about 30 minutes, the hosts came into play better. The narrow and until the end exciting game in the second half was decided by a penalty for Milan. After the game it had come to unpleasant scenes. The Frenchman Bakayoko had exchanged the jersey with the Lazio defender Francesco Acerbi. Then Bakayoko had waved with his teammate Franck Kessie the jersey as a kind of trophy in front of the Lazio fans. Thereupon, there had been scuffles in the field. Now the Italian federation determines in the case.

Lazio is having a hard time this season, especially away from home. With 18 points from 13 games, the club is only in ninth place on the away table. In Roma, it is much better with eight wins, three draws and three defeats. The 27 points mean the sixth place in the home table. After the first round, the men of coach Simone Inzaghi still in a good fourth place. In the back round table, the Lazali occupy only eighth place. In the Coppa Italia, the Biancoceleste have reached the semi-finals in which they were 0-0 against Milan in the first leg. The second leg in Milan will be on 24th April. The hosts have to give up Wednesday’s injured Jordan Lukaku, Valon Berisha, Adam Marusic and Stefan Radu. Luis Alberto and Joaquín Correa are suspended. Without Luis Alberto, Milinkovic-Savic will probably have to take care of the creative moments in midfield.

After defeating Napoli 2-0 on Matchday 28, coach Davide Nicola had been dismissed at Udinese Calcio. The club was then in 16th place, only one point before the first relegation rank. Nicola had replaced the Spaniard Julio Velazquez as coach in November. As a new coach Friulaner now committed the Croat Igor Tudor. Tudor had looked after the club in the previous season on the last four matchdays and rescued from relegation. The start under the new coach was promising with two wins and a draw from the first three games. With the 0: 1 at AS Roma on Saturday, the Bianconeri but had to accept the first bankruptcy under Tudor. In a heavy rainfall, Edin Dzeko scored the only goal of the day.

Thus, the “Little Zebras” continue to float in acute danger of relegation. Especially away, the club from Udine is having a hard time. In 13 appearances the Bianconeri collected with only one victory and four draws only seven points. Only three Serie A teams were off-field this season. Overall, Calcio has been waiting for 12 league away games for a win. In front of their own fans were with five wins, three draws and six bankruptcies at least 18 points. This puts the club in 15th place in the home table. With seven points from eight re-runs, Udinese Calcio is also the second-worst team in the second half of the season. After all, the trend in the first three games under the new coach Tudor clearly showed up. Udinese is injured in Roma without Valon Behrami, Antonin Barak, Bram Nuytinck and Nicholas Opoku.

Lazio Roma and Udinese Calcio have met 79 times. In direct comparison, the Romans with 36 wins the nose ahead. 24 successes go to the club from Udine. In Roma the record is 20 home wins, eight draws and eleven away wins. Eight of the last nine duels against Udinese won Lazio. Once there was a point division.

Udine wants to bring back the points that were left on Saturday with the Roma, on Wednesday. Lazio will have to win, otherwise the Europa League line threatens to leave without the Biancoceleste. The Romans are six points behind Champions League places. On the first European League rank, there are currently “only” four points. After three games without a win, the men of Coach Inzaghi are certainly not in top form. But the foreigners from Friuli could be the right opponents at the right time. Since 12 away games in the league, there was no more threesome for Udinese. Lazio, on the other hand, has suffered only one defeat in the last ten home games. And there was against clear league leaders and reigning champion Juventus. Even the direct comparison speaks in the duel Lazio vs Udinese for a prediction on the home side.

In our preliminary report almost all factors speak for a home victory of Lazio. So the hosts go to the duel Lazio vs. Roma. Udinese the odds also rightly as a clear favorite in the game. However, as the betting odds for a regular success of Roma are so low, we refrain from betting on the outcome of the game. Instead, we set Lazio Roma vs Udinese Serie A pick-up. Our tip on over 2.5 goals. In the last three home games of Lazio the value of 2.5 goals has always been exceeded. The same applies to the last three duels between the Biancoceleste and the Bianconeri. Alone Lazio has scored at least two goals in their last three home games and in their last three duels against Udinese. The Lazali at home but rarely play to zero. The only succeeded in two of the last eleven home games.

Who for the match Lazio vs Roma? Udinese is looking for a different prediction, it could also try with the tip “Both teams to score”. As mentioned above, Lazio has remained conceded only in two of the last eleven home matches.