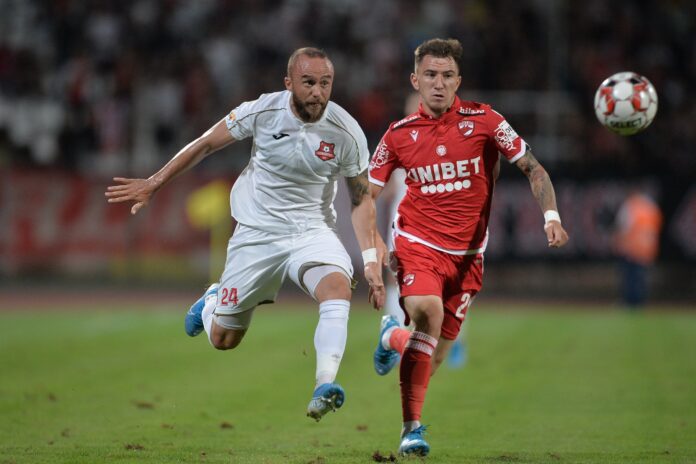 Dinamo Bucharest will receive AFC Hermannstadt on matchday 1 of Liga 1 in Romania. So far, these two clubs have rarely met, as AFC Hermannstadt has only been represented in the strongest Romanian football league since the 2018/19 season. Nevertheless, this game should be exciting, because both have new coaches under contract since summer 2020. The fact is that Sibiu has only won against Dinamo Bucharest once. That was the case in the last encounter.

Dinamo Bucharest was not very convincing up to now

The Red Dogs from Bucharest only ended the previous season on August 5th, 2020. You were represented because of an 8th place in the table in the relegation round 2019/20. They only got 34 points in the regular season. They came to a conclusion 37 times and 41 goals were allowed. Thus they are superior in attack to Sibiu, as well as with their defense, but they are the fifth weakest defense. In spite of all that, they were good for the fifth most goals. In 2019/20 they were the second strongest home team and the second weakest away team. They finished the relegation round on the penultimate place in the table. They only won two games and managed to draw two. They admitted defeat 5 times. Dinamo Bucharest also haven’t won a single home game. The cup semi-final against FCSB should not be forgotten. They lost both the first and the second leg with 0: 3 and 1: 0.

Let’s summarize again:
Dinamo Bucharest have only won 3 of their last 10 games and managed to draw 2. They admitted defeat 5 times.

The 68-year-old Gheorghe Multescu has been in charge of sports at Dinamo Bucharest since July 14, 2020. He has an average coach success rate of 1.39 PPS. So far he has only met Sibiu once. On October 20th, 2018, when he was a coach at Astra Giurgiu. Multescu won this game with 0: 2. The Romanian has already had a lot of coaching stations. He stayed with a club for barely 1 year. Most recently he coached Petrolul for 12 games with good success mind you. Between July 1st, 1990 and June 30th, 1991 he was coach of Bucharest for the first time for 4 games, but with modest success. The 2nd time he was employed by the Red Dogs between March 5th, 2008 and April 4th, 2008. On average, it made for 1.60 PPS. How long and, above all, with what results he will coach at Dinamo Bucharest this season remains questionable. His contract should run until June 30, 2021.

The men from Sibiu have been playing in Romania’s strongest football league since the 2018/19 season. Your season ended on August 5th, 2020. They ended the regular playing time with 25 points in 11th place in the table and thus found themselves in the relegation round. After 26 matchdays they had 26 goals and 44 goals against their account. As a result, they hadn’t been convincing offensively or defensively. The relegation round went better for them. They finished this after 12 matchdays in 2nd place in the table. Even if they were rather weak in the main round away, they knew how to convince in the relegation round with a 3rd place in the away table. They only suffered 1 defeat on foreign turf and were able to celebrate 3 wins and 2 draws.

All in all, FC Hermannstadt has only lost 2 of its last 10 games and only had to be satisfied with a draw 3 times. They celebrated 5 victories.

On June 19, 2020, 35-year-old Spaniard Rubén Albés was signed as coach at AFC Hermannstadt. He has never met Dinamo Bucharest or their coach before. His average success rate is 1.42 PPS. Albés previously worked as a coach at UCAM Murcia and the Celta Vigo B team, as well as at Real Valladolid. Always with modest success. It seems to work better with Sibiu. Because of 9 games under his leadership they could win 5 and ensure 2 draws. They gave up twice. They came to a conclusion 15 times and allowed 12 goals. AFC Hermannstadt has been unbeaten for 7 match days.

Dinamo Bucharest gave up 7 players over the summer of 2020. Among them are their keeper Riccardo Piscitelli and their center strikers Slavko Perovic and Mattia Montini. Many defense lawyers were fired. Only 1 player was newly signed, namely midfielder Vlad Achim.

AFC Hermannstadt rebuilt its squad a little more coarsely. They made 5 players. For example, center forward Gabriel Debeljuh was replaced by Cluj and Radu Cristiu as well as Afonso Taira, Srdjan Luchin and Biel Company had to leave Sibiu. They have 6 new signings. From FCSB Claudiu Belu-Iordache changed from FC Arouca Fábio Fortes and from SC Amiens U19 team Luca Florica. Adrian Scalatache, Agostinho Cá and Edson Pires complete the newcomers at AFC Hermannstadt.

As already mentioned in the introduction, this pairing has been very rare so far. Only 6 times to be exact. Hermannstadt only won the last game 4-2 at home. Dinamo Bucharest took 3 wins, that was always the case in Bucharest. They parted ways twice, in Sibiu with a draw. In 3 of these 6 duels, 2 times in Bucharest, over 2.5 goals were scored. Both teams met 3 times. In Bucharest this was only the case once.

Key points for the match Dinamo Bucharest vs FC Hermannstadt

In our opinion, AFC Hermannstadt has strengthened itself through the newcomers. They also won the last game against the Red Dogs and they had been more successful in the last 10 games. Therefore one could risk an outsider bet on FC Hermannstadt. Tip 2 is therefore a good idea. Of course, this win bet can be secured with a double chance tip X / 2 bet.